Tyrone Hall is the “Ricky Roza,” To the Tech Game! And here’s why!

Tyrone brings 10 years of Linux experience from the field of information technology, in which he has a diverse background in extensive instructional workshops and enterprise infrastructure architecture. At Dynamic Mentoring Tech, he oversees all expects of training, tech programming, mentoring, sports and workforce development as Chief Executive Officer. Tyrone is responsible for the DMT technical core, that supports enterprise applications, enterprise data, research support, cybersecurity, education, user support, infrastructure, and information security.

Previously, Tyrone served as Linux System Engineer, where he had a similar portfolio with Oracle, AWS, Microsoft and Google, where he oversaw implementation of systems and served as an infrastructure expert for many IC and DoD agencies. He is known as an IT champion from the mentioned tech giants and is known for his initiative to improve efficiency and cost effectiveness for customers technically. He implemented many large projects that impact critical infrastructure, networks, databases that supports national security across the nation. He also led the efforts to secure many contracts for many forms of cybersecurity, to included: cyber ops/analyst and Guardium Database Security Architect supports.

Tyrone served as Linux DevOps Cloud Engineer, where he led the effort to of CI/CD automation for a number of local and government organizations in the last three years. Tyrone has a been thoroughly educated through ZiyoTek Institute of Technology: Systems Engineering and DevOps Engineering Science. Additional, Tyrone has been hand crafted as an Oracle Expert in SQL, Database Administration, Oracle Cloud Infrastructure, Oracle Linux and many other areas of expertise. He has been mentoring over the years by his mentor Didian Tsongwain, CEO of MetropolTech Consulting, Inc. Tyrone learned many other skills in Linux, Oracle, IBM Guardium, AWS, Google, Cyber Security and many other technologies to survive in this tech savvy century. These skills proved to shift his financial trajectory by 600%! Now, it’s time to pass the puck!

Tyrone’s testimony is ALL apart of Dynamic Mentoring Tech vision, to provide a platform that would allow the youth, the men, families, professionals, organizations globally the opportunity to take advantage of developing industry leading tech skills the Dynamic Way! “Dynamic Mentoring Tech was created, to literally provide mind-blowing opportunities that will shift financial trajectories communities wide! 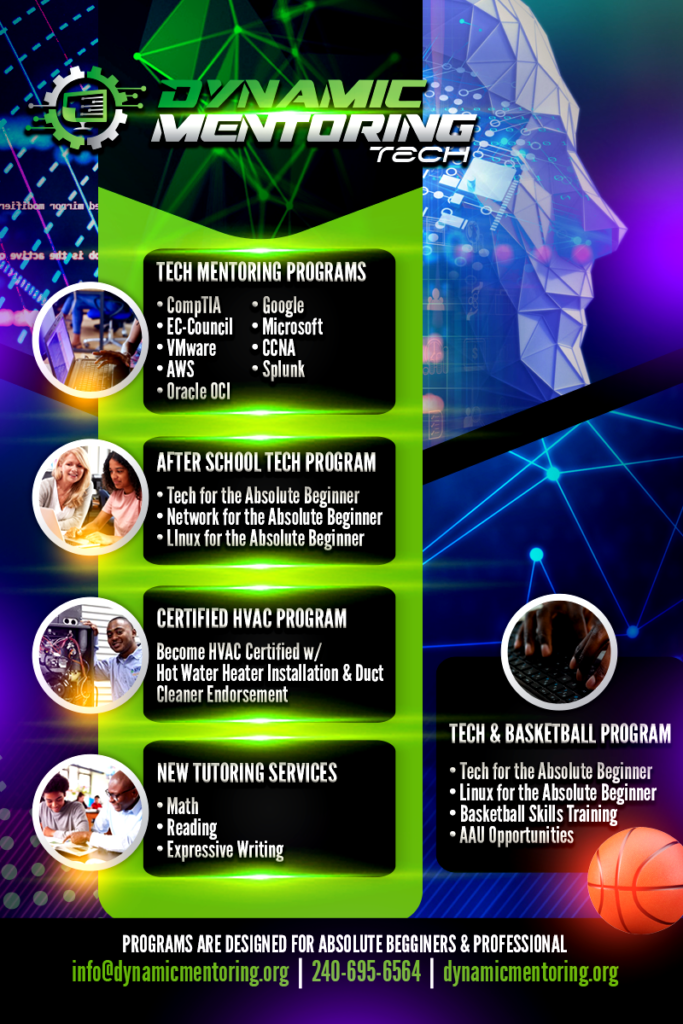